Since many centuries in the Mediterranean, the Bichon Frise is known to have existed. It was an item of import, trade and transported by sailors from continent to continent. Known to be decedent from water spaniel, this breed spread in Europe in a rapid manner. While in the era of 1300 they became a favorite of the Italians and in 1500 for the French it became popular. Their popularity in Spain continued throughout these centuries.

Although sometimes shy, this type is very good with children besides being a gentle companion. It has soft undercoat with more extended and slightly wavy coat. The color usually varies from gold, cream, blue or black and silver.

Slightly reserved and shy than the Bichon Frise, this variety has a white and cottony coat with no undercoats. When relaxed, the tail hangs like a limp and when alert it curls over the back.

In love with the human company, the Bichon Frise is a little and fluffy dog. It is affectionate, lively, bold and independent in spirit with a happy and self-assured temperament. They thrive by charming those around them and prove themselves time and time again as socialites. It has independent nature, while the moods are streaky and often temporary.

This breed held the reputation of a natural companion and is also called little puffs of personality. They gel well with children, love people of all ages and are always a joy to watch. This dog brings a smile to the place where they go.

Bichon Frise is known for having bursts of energy and lively. For them, short, vigorous activities are most suitable coupled with 15 to 20 minutes walk. Some active games like gentle wrestling, chasing games can make the exercise livelier.

Every month, this breed requires bathing and professional grooming is recommended. Staining eyes should be cleaned extensively and hair near the ear requires trimming with a blunt pair of scissors.

There are several health problems like allergies, hyperadrenocorticism, and patellar luxation apart from canine hip dysplasia and cataract. There can be liver disease and leg- Perthes.

Since they are a friendly, intelligent and attentive lover, they are easy to train. They are willing and eager learners. Moreover, there should be no harshly corrective training techniques since they are sensitive. The positive, rewards based methods can be helpful.

Dry kibble and canned dog food provide different benefits. Canned food contains high water content, and this is beneficial for them. There should be the availability of water while delivering them with canned or dry food. 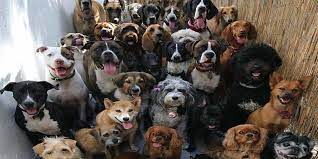 These dog breeds are most easy to take care of

Whether you've never owned a dog before or are looking to add another member to your pack, it's important to know which breeds are best suited for you. The following list contains 10 of the most easy-