The story behind the origins of the Biewer Terrier is quite interesting. Werner and Gertrud Biewer had been raising Yorkies for more than 20 years, and on 20th January 1984, a piebald Yorkie was born in the litter of many other puppies. The little puppy was named Schneeflocken von Friedheck, and the Biewer couple started to raise and selectively breed this piebald. The dog became popular in America in 2003 and was called the Biewer Terrier.

This little pup with a blue, gold and white body, named as Schneeflocken von Friedheck was amusing and attractive. Therefore Mr. and Mrs. Biewer carried on selective breeding for the purpose of designing more pups of this piebald variety, also naming these white-patched Yorkies as â€œBiewer Yorkshire Terrier a la Pom Ponâ€. Their initiatives became successful by 2003 when they gradually introduced the Biewer Terrier to America. Â These breeds were the first of their kind to be referred to as a purebred following the scientific data instead of pedigree data.

The Allgemeiner Club der Hundefreunde Deutschlandofficially recognized it under the name of Biewer Yorkie in the year 1989. Presently these dogs are recognized as a breed entirely different from the Yorkshire Terrier as fixed by the BTCA (Biewer Terrier Club of America). Itwas also included as a part of the Foundation Stock Service of the AKC. The Unite Kennel Club (UKC) recognized it very recently on 1st January 2016.

Biewers are gentle, affectionate and mingle easily with people. They are very loyal and eager to please their master. It is very childlike and quirky, keen to do funny things like carrying a toy in its mouth. These purebreds may try to be dominant over their owners and are skeptical in front of strangers. They have a greater personality than their size which makes it difficult for them while dealing with other pets. Biewer Terriers are excellent companions to older people and older kids who will handle them responsibly.

Having a friendly and affectionate nature, the Biewer Terrier is quite comfortable enough to mingle.

They also possess a highly loyal and dedicated nature, loving to spend quality time with their masters and other family members.

The Biewer Terriers are at times childlike and whimsical in their behavior, loving to do a lot of amusing things like carrying a toy in his mouth.

In spite of their pleasing nature, they may sometimes be strong willed and yappy just like the Yorkshire Terrier, trying to have the upper hand over their masters.

They are wary and suspicious on seeing an unfamiliar face at the beginning, even going to the extent of warning the owner about the same. However, they gradually get along well with the stranger once they realize that he is not a threat to their household. Inappropriate socialization might make these small breeds little aggresstowards strangers.

These dogs are said to have a greater personality than their size, thus making them a little difficult while dealing with otherdogs particularly the bigger ones or even cats.

Besides being perfect companions to all, especially the elderly group, this breed is ideal for homes with older children who can deal with them in a responsible way rather than the little ones who can be restless enough with them.

Although they are small in size, Biewers are very active and require brisk walks daily. A fenced yard will be good for their running and play sessions. They do well in apartments as well, provided there is sufficient space for their activities. Lack of exercise will make them prone to bad habits like barking and develop irritability.

Brush their silky coat to prevent mats and tangled hairs. The hairs should be dry while combing or else they will be damaged, so spray a mixture of water and dog conditioner before brushing. Biewers should be bathed weekly to ensure a clean coat. Clean both their ears and eyes on a regular basis to maintain hygiene.

Biewers are prone to diseases common to the Yorkshire Terrier, like patellar luxation, hypoglycemia, tracheal collapse, and bladder stones.

A smart and firm owner is essential to train the Biewer due to its strong-willed nature. Socialization from puppyhood is necessary so that these dogs mingle well with guests and other pets. The owner should take them to dog parks to help them interact with other puppies. It is important to teach them basic commands to ensure they are obidient.

Training these intelligent dogs would not be too difficult a task unless the owner is smart, witty and tactful enough to deal with his stubborn and strong willed nature.

Biewer Terrier puppies should be socialized since the beginning so that they learn to mingle well with guests and other dogs of the house. Make sure to build its rapport with people who visit your home often by asking them to carry a treat with them whenever they interact with the dog at least in the beginning. Take them to dog parks frequently and help them interact with other pups. If you have another pet puppy at home, bring them up together. Give them time to interact with one another with supervision, and be assertive enough if one gets aggressive over the other.

Teach your dog to follow the basic commands like â€œStop,â€ â€œSit,â€ â€œPauseâ€Â  â€œCome and â€œGo,â€ so that you can have better control over it. Treat it in a way similar to a big dog and forbid it from doing anything disapproving like displaying aggression or howling unnecessarily.

Biewers should be fed ¼ to ½ cups of good quality dry dog food on a daily basis. Feed the pet at a particular time, and never make them wait for food as they suffer from hypoglycemia.

Feed your Biewer Terrier with one-fourth to half a cup of dry dog food on a daily basis. Their stomach is known to be a little sensitive. Therefore owners should take special care while fixing a diet for them. Care should even be taken to feed them at a particular time daily rather than making them wait for prolonged periods in between mealtimes since they suffer from hypoglycemia. 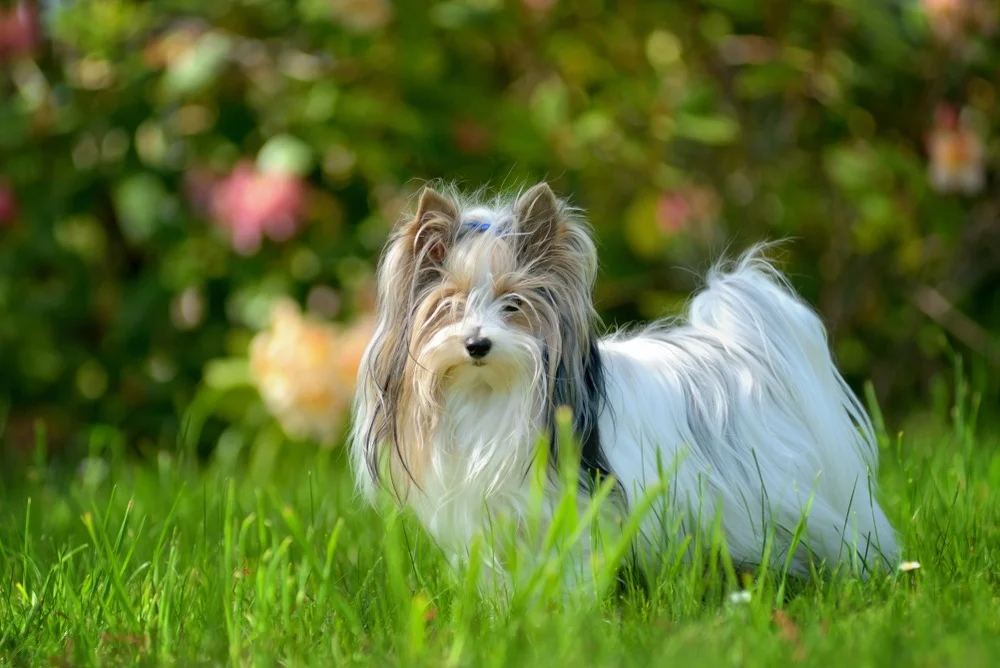