The Yoranian also known as the Yorkie-Pom or Yorkie Pomeranian mix, is a designer dog breed that is a cross between a Yorkshire Terrier and a Pomeranian. The breed is relatively new and the history of the Yoranian is not well-documented. However, it is believed that the breed was first created in the United States during the late 20th century, as a result of the growing popularity of designer dog breeds.

The Yorkshire Terrier and Pomeranian are both small breeds of dogs, and they share some similarities in terms of their personalities and exercise needs. The Yoranian is a small dog with a playful and friendly personality, and it is known for its loyalty and affection toward its owners.

Due to being a hybrid, their characteristics can vary, depending on the dominant traits inherited from their parents. They can be either more similar to Pomeranians or Yorkies. The breed is not recognized by the American Kennel Club (AKC) or other major kennel clubs, as it is considered a designer breed. However, it is recognized by some designer dog clubs and organizations.

The Yoranian pup is among the most graceful dogs with a charismatic persona that not only makes it readily strike a companionship with family members but also makes it endearing to one and all. Since a Yoranian always prefers to be in the company of humans, it tends to become nasty if periodically left alone for a long duration.

The Porkie dog being a cross has inherited some character traits from both the Yorkshire and Pomeranian purebreds. For instance, it has acquired its domineering or overprotective quality from Pomeranian. This attribute makes the Yoranian fiercely protective about the family that has adopted it. On the other hand, its terrier lineage makes it wary of strangers and intruders. The Yorkie Pom doesn’t feel threatened or discouraged by its puniness and doesn’t shy away from barking at other dogs or showing aggression to safeguard its territory.

The Yoranian does not require much effort when it comes to keeping physically active as the dog prefers to be playful as long as it is indoors. The breed also loves to be taken out for long morning or evening walks and gets to exercise itself intensively during its outdoor trips. However, avoid taking them outdoors, especially during extremes of weather as it is unable to tolerate too much of heat or cold. They love to play with toys and puzzles and can keep self-engaged for hours in the company of toys and keep rotating the toys from time to time so that it doesn’t feel bored.

The Yoranian’s coat should regularly be brushed to avoid tangle or mats and bathing once a month with a mild shampoo and conditioner can keep its coat shiny. Cleaning of teeth, fur and trimming of nails is essential.

Yoranians are genetically predisposed to yelping or barking occasionally and therefore it is significant to train them appropriately so that it picks up right habits, least of all not yapping without rhyme or reason. Also, since their attention or concentration spans happen to be short-lived, keep training program short. They have an inherent knack for quickly imbibing new tricks.

Yoranians have a weakness for wet foods, but that doesn’t imply they will shun dry foods if and when offered the same. However, never provide more than ¼-1/2 cup of dry food per day. 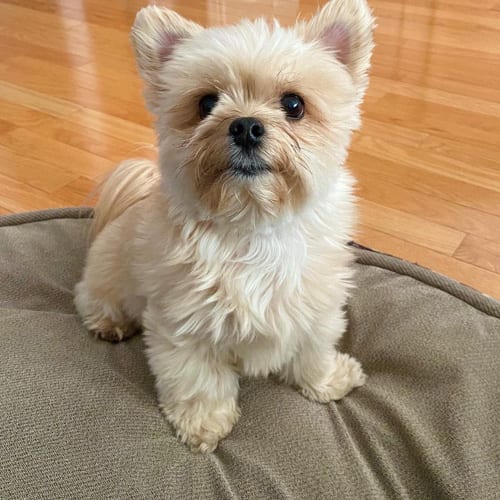